You need the best cherries for old-fashioned if you're making a traditional cocktail. Besides, there is no bad time to drink whiskey. However, the cocktail cherry is one of the most misunderstood cocktail ingredients. You can walk into a small bar and order an old-fashioned, then you are given orange slices and neon maraschino cherries that are vigorously mixed. Not only is this not a decent technique to prepare old-fashioned cocktail recipes, but their use of cherries is incorrect. The article will explain virtually everything you need to know about cherries for old-fashioned. Keep reading!

What Kind of Cherries Do You Use For An Old Fashioned?

Cherry is a fleshy drupe that grows on numerous plants of the Prunus genus. Conversely, a cocktail cherry is a sweetened, preserved cherry prepared from light sweet cherries. Cherries are first preserved in a brine solution containing calcium chloride and sulfur dioxide to bleach the fruit in their modern form. Besides a cocktail cherry in its most basic form, it is a cherry used as a garnish in drinks, and they are divided into two categories which we will discuss later on. Now that we understand what a cocktail cherry is, let's check out the best cherries for old-fashioned.

Luxardo maraschino cherries are the gold standard of the cherry cocktail world. You will find them in most of the world's best bars, and they're still created in Italy by soaking the cherries in marasca cherry syrup, which is an all-natural technique. Though these original maraschino cherries come in a high price tag, they are worth the price in most cases.

The Luxardo brand cherries' texture is meaty, and the fruit is usually soaked in rich syrup making it ideal subtle sweeter for an old-fashioned. And though Luxardo maraschino cherry is more pricey, as mentioned, they work in virtually every drink. Conversely, this product has no preservatives or thickeners, and the color is all-natural. The syrup and fruit have a 50/50 split. Moreover, you can get a rich cherry with a pleasantly tart flavor that's far more complex than store-bought maraschino cherries. 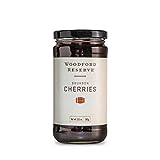 Although not made by the legendary bourbon maker, these cherries are usually flavored with Woodford Reserve to offer extra depth to any cocktail. The firm, sweet Bordeaux cherries are acquired from Oregon Cherry Growers, a grower-owned cooperative in Salem, for these cocktail toppers made by Bourbon Barrel Foods and available at the Kentucky distillery. Besides, the fruit is hand-harvested preserved with the stem intact in Kentucky.

After the fruit settles to the bottom, the dark and silky syrup makes a wonderful drizzle atop a whiskey sour. You can also use these cherries to muddle, garnish, and top your favorite cocktails. Besides, these bourbon cherries are made from natural ingredients and offer brightness to the mix as well as hints of Kentucky's best bourbon whiskey.

If you prefer cherries on the tarter side, we recommend the Fabbri Amarena Cherries. The fruit is wild from the Emilia-Romagna area of Italy. Behind the sweet cherry juice-boosted syrup in which they are candied lurks a delightful bitterness to help balance a cocktail that is already on the sweeter side, like a pina colada. The wild Amarena cherries are smaller, lighter, and less toothy than Luxardo, yet they're just as flavorful.

These cherries are candied with their fruit syrup. They're great in cocktails, as well as in champagnes, desserts, and even plain seltzer. However, they have a softer feel than candied cherry, similar to ripe peach velvet. And since the jar is smaller than others on the list, you will not get as many cherries. Nonetheless, the flavor of the cherries is strong; therefore, you only need one for your drink. Besides, you may use the syrup to enhance the flavor of cocktails that call for simple syrup. 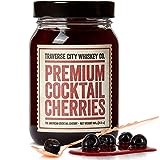 Traverse City, Michigan, earned the moniker "Cherry Capital of the World" because it accounts for 40% of tart cherry production in the United States. Traverse City, the whiskey firm, usually garnishes its cocktails with locally sourced Balaton cherries. According to the company's co-founder, Chris Fredrickson, the enormous, plump, firm premium cocktail cherries are supplied in five-gallon pails containing a natural syrup base that works as a buffer to preserve the fruit from smashing together.

They're slow-cooked in big copper pots after a leisurely bath in the company's whiskey and mixed with a near-boiling syrup mixture, which gives the fruit undertones of smoke and char and nearly woodsy flavor. The resulting product is syrup-packed and has an all-natural dark hue. The jarred cherries have a shelf life of two years and are kosher.

Jack Rudy usually uses whiskey to make boozy cherries but not as sweet as the Luxardos. If your cocktail is already on the sweeter side, or you don't want to dominate it, you can count on these cherries. Besides, these cherries are attached to their stems, giving them a rustic appearance than other jarred options. They are browner in color, have softer skin, and taste boozier since they are packed in sugared bourbon rather than fruit syrup.

The texture is usually similar to maraschino cherries, though the flavor is light whiskey. They are also larger than the average Maraschino. Also, they're fantastic in a standard Manhattan and bring out the cocktail's flavor. However, the texture may be less appealing since the alcoholic maceration diminishes the contrast between the fruit flesh and skin.

Why Should Spend on Cocktail Cherries?

You may keep purchasing the cheap Maraschino cherries from the grocery store, but the texture and flavor of these are night and day. Cheap Maraschinos usually use red dye 40 to gain the neon red coloring. This dye has been linked to various health complications, however more practically, the cherry will stain your cocktail and add a cloyingly sweet taste to it.

Although the cherries on our list might seem expensive, you are getting natural vegetable and fruit-based colorings. Furthermore, the flavor complexity and purity are closer to what you would receive when traditional cocktails were initially invented. The cherries usually enhance rather than overshadow the taste of your drink.

Factors to Consider Before Buying the Best Cocktail Cherries

Before buying the best cherries for old-fashioned and Manhattans, ensure they're preserved in natural ingredients, which may include spirits like bourbon, whiskey or brandy (citric acid) and natural fruit coloring. Avoid artificial dyes, chemicals, and corn syrup, which can all add an off-putting flavor to an otherwise well-crafted cocktail. Besides, it's recommendable to read the ingredient list on the container to know what is in them, especially if you are sensitive to or allergic to certain foods

When shopping for the best cherries for old fashioned, you will realize there are two distinctions: first, the steeping liquid and second, whether or not they feature a stem. Cherries are usually preserved in syrups or spirits, and the label should state this. We recommend going for stemless versions, especially if muddling is required, and if you are buying from a small market stand, ensure the cherries are pitted.

You need to look for cocktail cherries that include the stems. However, this depends on how you want to garnish your cocktails. Cocktail cherries are usually pitted and stemmed, and you can skew them for attractive garnishes. Besides, some companies leave the stems on the cherries to make them seem fresher (although they are sometimes pitted too). You can remove the stem before skewering or drop them into your drink. If you decide to eat them, keep in mind that even pitted cherries contain pit fragments.

Cocktail cherries are usually packaged in syrup which might contain alcohol. During processing, some cherries are soaked in alcohol (sometimes whiskey, cherry brandy or cherry liqueur) which may or may not be transferred to the final cherries or syrup.

Some cherries are alcohol-free, and the ingredient list should indicate whether or not alcohol was used to produce the cocktail cherries. However, the alcohol amount is often insignificant. If the syrup includes a quantifiable level of alcohol, the label should indicate alcohol by volume declaration (ABV).

Cocktail cherries should be plump, firm, and overflowing with cherry taste, with almond overtones occasionally increased with almond flavoring. Besides, cherries are naturally a rich red (or even deeper, depending on the type). That color will only intensify with preservation, particularly in brown spirits—in other words, anything bright is off-limits. Mushy isn't a good thing, and neither is it too sweet.

What Are the Common Types of Cocktail Cherries? 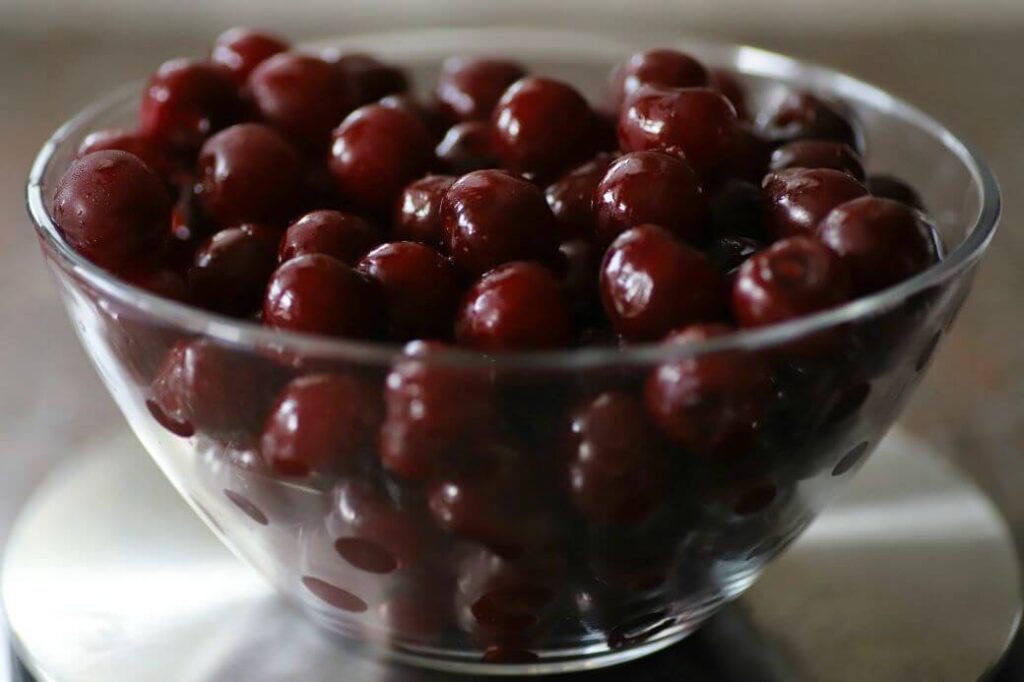 This is a generic word that usually refers to any syrup- or alcohol-soaked cherry used in cocktails. Therefore, any cherries listed below might be classified as cocktail cherries. However, not all cocktail cherries are made equal.

This cherry is widely used to produce craft cocktail cherries. These are pretty tart cherries on their own. However, depending on how manufacturers bottle them in syrup, the flavor might become sweeter. Besides, if you see cherries promoted as "Amarena cherries," you can know they'll be delicious in your cocktails.

Luxardo brand cherries usually use a natural procedure that involves soaking marasca cherries in marasca cherry syrup. As a result, the flavor is far more complex than regular maraschinos, and it is the most popular premium "cocktail cherry."

The extremely sugary, bright red cherry you are used to seeing in poorly made old-fashioned and on ice cream sundaes.

These cherries are usually soaked in sugar, brandy and water to create a distinctively flavored cocktail cherry. Luxardo or Amarena cherries are frequently referred to as brandied cherries; however, this is incorrect since they are not typically soaked in alcohol.

Frequently Asked Questions on the Best Cherries for Old-Fashioned

2. What's the shelf life of cherries?

Cocktail cherries usually have different shelf lives and storage options depending on their production. An open jar will generally keep for many months and, in some cases, up to eight months or more. Besides, most cocktail cherries don't need to be refrigerated; instead, they are stored in a cool, dry place away from direct sunlight. This is often true if the syrup crystallizes due to chilling. Nonetheless, some manufacturers advise storing unsealed jars in the refrigerator. Therefore, whenever you get a jar, check the label for an expiration date as well as the best way o store the cherries.

3. What effect do cherries have on your body?

Cherries are high in minerals, vitamins, and fiber. They also possessed antioxidant properties. According to researchers, cherry may also help lower blood pressure because of its high polyphenol.

4. Are maraschino cherries and cocktail cherries the same thing?

There are two main meanings for maraschino cherries. First, modern types are artificial crimson and traditional Italian-style maraschino cherries soaked in liquor (such as Luxardo). The modern maraschinos are "bleached" in calcium salt brine before being poached in syrup and dyed red.

Candied maraschinos graced cocktails and ice cream delicacies for most of the twentieth century. However, as consumers became aware of these cherries' unnaturalness, demand surged for a more natural option. As a result, more firms began producing cherries free of artificial chemicals, typically marketed as cocktail cherries.